THANKS FOR THE LOVE SHARED AT TABLE FOUR!!

Well, it not a book release, not an event or reading suggestion. However, when you have the pleasure of meeting such beautiful people, it's also worth blogging about. Saturday night we attended the Dinner Detective Murder Show at the Sheraton Hotel in Chapel Hill, North Carolina where my girls and I were guests of Table Four. Well, it was an honor to be one of the special people seated at Table Four where friendships were made, along with an exciting night of much fun and laughter as we strive to solve the mystery :-). 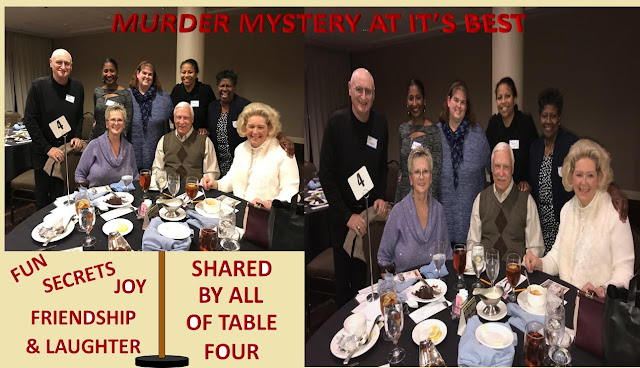 And, who figured the Prime Suspect was sitting at a table behind them, except for these incredible minds seated at Table Four. Just saying, one of the unique individuals of table four won the prize for solving the mystery ... who would have imagined it!! Well, if I must confess, other people, solved the mystery too, but great penmanship along with attention to finer details won the prize.

Although, our night was already a winner because of the wonderful friendships we made; however, the hilarious show was an extra bonus and worth seeing. Sort of like icing on the cake so to speak because you will probably only get one table four as incredible as ours!! Much love and blessings to our new friends ...!

Eloise Epps MacKinnon
Eloise Epps MacKinnon, Christian Romance Author, Motivational Speaker, and a Servant of God. She advocates for the empowerment of God’s people to learn their god-given purpose in society. A life brand that God gave his only Son for us to achieve without a cost; the choice and power to be true to ourselves, unmask our inner beauty, and let Him shine through us. Eloise’s novels are written with a message for everybody who believes they’re too broken for God to fix. Eloise’s writings and speaking engagements, she hopes to inspire readers not to accept the labels that man has branded us with; instead, the one that God gave His only Son for us to achieve. Through the words on every page, Eloise elects to provide you with the courage to stand up and be proud of who you are, regardless of what others think! And, even though our lives may or may not parallel the characters in her books, the fairy tale happy ever after. It can be embodied by all the struggles and the trust and faith the characters retained to reach the faithful ending. And, just like God, fulfilled their prayers, He will do the same for each of us as promised in His words; the Holy Bible.